Anbefalet under Det skal du se! uge 41
In this new series of works by Kaspar Oppen Samuelsen, it’s as though the human body is just one small internal part of an intricate clockwork. Obviously, I don’t literally mean grandfather clocks and Swiss watches; I don’t mean that kind of clockwork. I mean clockwork in a more metaphorical sense; one that is geared with historical styles, patternations, animal spirits, and many other things besides; a clockwork that holds all sorts of increments together in one integrated rhythm and dial.

In the paintings that circle the exhibiton space, we can see faces, hands, limbs and bodily contours that are caught in the midst of a colourful and kinetic energy that seems to envelop them. These bodies are dissipated within the (folksy, futuristic, and Pan Asian) scheme of each painting. Some of these bodies are characters with coloured facemasks and are dressed in elaborate costumes and other fashionable adornments; painted with the effect of disguising the body’s figurative dimensions, while also accelerating the body’s immersion into the abstract planes of the environment. In Kaspar Oppen Samuelsen’s works, it becomes impossible to tell where the bodies start and stop; where the life of animals, humans, objects meet; where the abstraction begins.

In The Logic of Sensation, Gilles Deleuze describes Francis Bacon’s painting of the human body in terms of the ‘diastole’ and ‘systole’, borrowing the terminology from the medical description of the expansion and contraction of the beating heart. The ‘diastole’ is the dynamic of Bacon’s work that propels the figure to the structure of the painting, while the ‘systole’ is the reverse. The bodies that appear in Kaspar Oppen Samuelsen’s works similarly pulse between the paintings’ layers like a membrane. The dissipation of the figure across adjoining and often mismatched sheets of paper is a perfect example of this, where in a number of works bodies are abstractly, figuratively and structurally dissected by the variances of coloured backgrounds.

There are seven of these paintings, and like the days of the week, each painting carries a sense of rhythmical procession and an infinite loop of destiny. The dial is broken, but the clocks are ticking. We’re already underway. 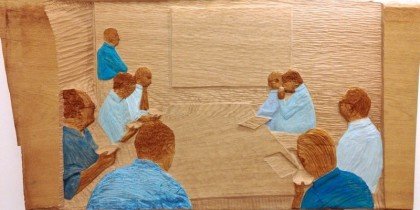 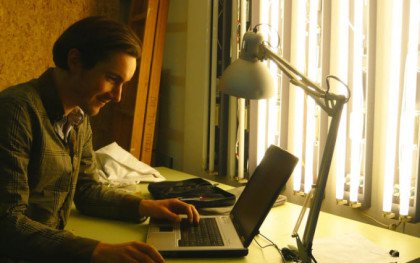