V1 Gallery is pleased to present our first exhibition with Danish video artist Katja Bjørn. Gargoyle Room is a video projected on two walls combined with a strong auditory side making it a sensual total installation depicting the nature and condition of lust.

Most of Katja Bjørn’s work plays on a dichotomy between awakening the voyeur within causing us to stare intensively and an intimidation that leads to embarrassment or disgust so one must look away. Gargoyle Room is no exception. It is a visually striking and claustrophobic confrontation, an entrance into the subconscious of pure instinct and lust without interruption from self-censorship, guilt and shame. A conflict between pleasure and pain, beauty and disgust. Disgust as described by German aesthetic professor Winfried Menninghaus: ”…disgust is the experience of a nearness that is not wanted”.

In the dark scenery of the video masked characters in underwear explore each other curiously bringing it all down to the bodily experience of touching, fumbling, breathing, enjoying and playing. Sculptural formations of bodies form patterns in the dark. Vague hints. Glimpses of intimate situations. Blurry close-ups that trigger our own fantasies and imagination. Usually performing a main role in her works, Katja Bjørn is this time closer to the role of the anthropologist of a field study. The scene is staged by the artist, but the characters in the video are played by actual swingers performing the sexual act instinctively as the camera runs, while dismantling cultural borders of everyday life such as social rank, life situation and age. The viewer becomes the intrusive voyeur to a mysterious game enhanced by the masks – frightening yet beautiful and haunting like gargoyles in hidden gems and corners of Gothic Medieval architecture. All together stressing a feel of the surreal, sectarian, ritualistic, unheimliche, and secret.

The confronting in-your-face images and tactile close-ups of body parts are contrasted by the cold colours, slow filming and sometimes carefully covered or turned bodies. The story of desire is by a closer look turning more into a melancholic story of longing as a human condition and vulnerable bodily experience. Or, contrasts being one of Katja Bjørn’s main characteristics, the work combined with the location of the exhibition and its history; a freezer used to house flesh and meat in a former butcher’s house in the Meat Packing District, the seemingly joyful scene takes a disturbingly turn.

Katja Bjørn (b. 1967) autodidact artist lives and works in Aarhus, Denmark. She has a Master in Religion and Art History from Aarhus University. Mixing video media with elements from ready mades, sculpture and installations Bjørn creates sensual works that she describes as ’sculptures with bodies’. Bjørn has exhibited in Denmark and abroad. Represented in the public collections of The Women’s Museum, Horsens Art Museum and Randers Art Museum. Member of the Danish Art Foundation 2014-16. Chair of the municipal think tank for the visual arts in Aarhus 2015-2016. 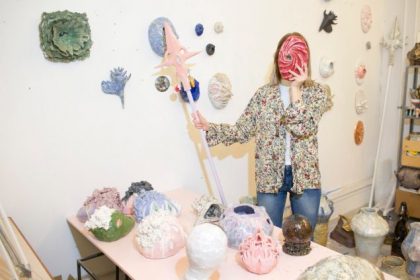