“In September 2021, we met at Kunstbiblioteket in Copenhagen to ponder our joint installation and their cellar where we were to exhibit. Normally, a cellar is the place where one goes when something needs to be brought out of storage. It can also be a very eerie hidden space, filled with stories we hardly remember or no longer relate to – ruins in the making. With this in mind, we decided that the installation should be site specific, becoming one with the inner world of the cellar it was to inhabit.

In April 2022 we met on the island of Møn – where Ida now lives and where Victoria
has experienced many life changes.

We decided to integrate elements from Møn with the existing elements of the cellar
by combining natural raw materials and video footage inspired by Møn’s local nature, elements that represented time.”

Ida’s video installation, “Grønsund”, examines the flow of the water along the shorelines of Møn. She captures the reflections on the water’s surfaces which mirror the sky as it changes with time, the seasons, the rhythms of the algae and the weather. The result is a video loop that when projected into the Kuntsbiblioteket’s niche becomes a new reality, yet connected to Grønsund.

Victoria’s, “Faint Murmurings”, focuses on the flow of a larger, resilient, and unified conversation. Her layered panels suspended from the ceiling, assembled using everyday, used teabags, were collected from family and friends from around the world. As types of “palimpsests” – reused or altered objects which still bear visible traces of their earlier forms – they represent passages of time. The moss below was collected directly from the shores of Møn – symbolizing the anchored connection to the island on which the concept emerged.

The results give the cellar a new life – a poetic voice – impossible to silence. 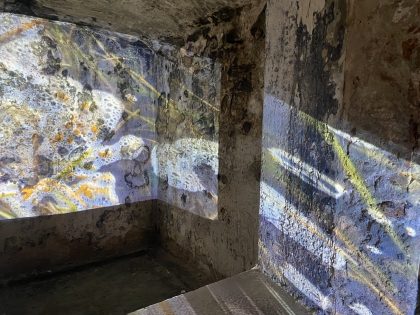