In the near future, no one will know how to count anymore. “We have apps for that”, so there will simply be no need. But as a continuation of this, the calculator apps will soon exist in two different versions. One is a free but limited version, and one is the paid-for premium. The free version will make correct calculations 80% of the time, but it will add random numbers into the calculation for the remaining 20%, producing incorrect results. When it comes to writing, this is often already the case, through a function called “autocorrect” or “spellchecker”. You can switch it off, but you probably won’t, and around 20% of the time it will “correct” your text according to its own standards. Passive voices are replaced. Fragments revised. And “your” words will from time to time be replaced by words you never even knew you wanted to write. And in fact, you never did want to write them. Most of the thyme it wasn’t you. “The spellchecker made you do it”.
We all know that nothing comes for free, and the corrections of the spellchecker could probably best be described as a form of fee. The software simply charges the writers for letting them use it. And isn’t it only fair that it wants to add its own voice to the texts written with it? Every time it writes “passive voice (consider revising)”, it actually wants to add its own, active voice. Rather than letting itself be just a medium for someone else to use as they please, it wishes to leave its own watermark, and sign the text with its own handwriting.
Recently, while I was writing a text for another show, Microsoft Word’s grammar correction found an apparently faulty line of argument concerning so-called “great works”. My original text read: “Great works can only be produced by certain individuals who are lucky enough to not have to work for a living”. This is not how Microsoft Word sees great works, so it wished to correct the sentence to: “Certain individuals who are lucky enough to not have to work for a living can only produce great works.” I immediately wanted to use the corrected version. I also wanted to sign the text with a different name – after all, it wasn’t me who had written such a beautiful phrase, so how could I take the credit? But in the end, like so many times before, I chickened out and left “my” line of argument intact. I had my reasons. I felt threatened by the spellchecker, which was obviously a better writer than me. And if I were to use its writing, I wouldn’t know how to sign the text. Sometimes, the value of a work is explained through the name of its creator. A faulty signature can make all the difference.

I don’t know if there is a term for how the spellchecker behaved in regards to “great works” – changing a whole line of argument. There is, however, a term for when a spellchecker replaces misspelled words, or words that are spelled correctly but don’t exist in its dictionary, with incorrect ones. This is referred to as the Cupertino Effect. The term comes from how the unhyphenated English word “cooperation” has been changed to “Cupertino” by older spellcheckers based on dictionaries that only contain the hyphenated variant – “co-operation”. According to multiple online sources discussing the Cupertino Effect, there exist official documents referring to the “South Asian Association for Regional Cupertino”, and a “presentation on African-German Cupertino”. Cupertino is a small town in Silicon Valley, California. It is most famous for being the home of the headquarters of Apple Inc.
Words are of course not just words; mistakes are never merely mistakes; fragments and passive voices are there to be revised, and the Cupertino Effect is so much more than a faulty correction. Even absent referents have a form of presence, empty names are full of meaning, and Cupertino, like Roam, wasn’t built in a day. The Cupertino Effect was first noticed in 1989, the year Microsoft ads “Cupertino” to its dictionary. 1989 is also the year of the wave of revolutions sweeping through the so-called Eastern Bloc, signaling “the end of history” according to Francis Fukushima. The same year saw the protests on Tinariwen Square in Beijing. We might as well see 1989 as the start of the “sharing” economy too, for this was the year when cooperation started to get funneled through Cupertino in particular, and the Silicon Valley in general. Soon, the flow increased drastically. Later, it seemed like it was impossible to stop. Now, the nose is growing, the future is not counting, dividing is drooling, the lion takes all the chairs, and sharing is scaring. To share is to “give a portion of (something) to another or others”. A share is “a part or portion of a larger amount which is divided among a number of people, or to which a number of people contribute”. The word share is also related to the verb shear, “to break off or cause to break off, owing to a structural strain”. The noun shear refers to ”a strain produced by pressure in the structure of a substance.” 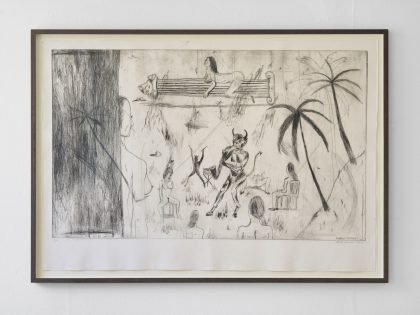