Morten Plesner’s solo exhibition Daydream Rituals at Bricks Gallery reveals new and complex layers of the meaning of artistic method and intend. While the contrast between the controlled and the random, the soft and the wild, and the primordial and the futuristic have always been at the core of Plesner’s artistic practice, the introduction of new materials such as lasers, papyrus, drum cymbals, and sound open up new spiritual and sensory horizons in his work.

The exhibition title, Daydream Rituals, points to Plesner’s artistic method as well as the works themselves. Plesner’s creative process is characterised by a continuous dialogue between the very concrete, repetitive, and intentional dimension of the ritual and the more intangible, ephemeral and unplanned energy of the daydream. Simultaneously, the new series of works seem to also hint at more mythological and fictional aspects, with materials, compositions and sound referencing spiritual practises, iconography, and pre-cultural aesthetics. One example of this is seen in Plesner’s laser series, Median Figure where pieces of Egyptian papyrus provide the canvas for symmetrical cyanotype drawings made from blue spectrum of a programmed laser beam. And in the Knotweed structure , two clay sculptures suggest a temple-like structure topped with drum cymbals, almost resembling a gong.

Visitors are invited to strike the cymbals, and the resulting sound, combined with the recording of the metallic sound of cooling clay form the firings, gives the work itself an almost ceremonial character – and reminds one of the inherent healing capacities of music. Daydream Rituals encompasses a list of newly produced works, including wall hung porcelain sculptures, smoke bomb paintings, floor-based capillary clay sculptures, and cyanotype laser prints. 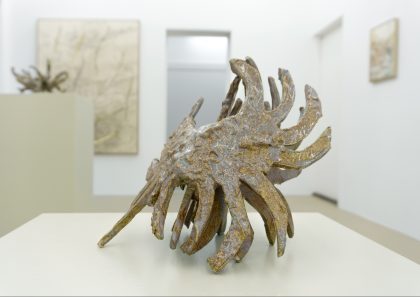 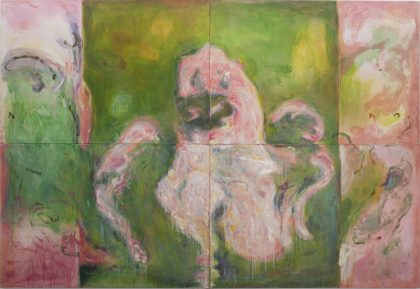