Jason S. Wright’s (b. 1987, USA) debut solo exhibition with V1 Gallery presents a new series of paintings on board and paper. The medium, so heavily weighed down by traditions, and having so often been declared dead throughout the 20th century, is never just explored for its own sake; Wright reinterprets and revitalizes the painting through the visual culture which characterizes our age.

A web of black/white photographs – cut-outs from found magazines or pulled from the internet – sinks into Wright’s collage-paintings, together with his cartoonish figures and grinning grim reapers. Wright reworks and overpaints these disparate parts with gestural brushstrokes and soft airbrush in bold or synthetic technicolor. His visual explorations on board and paper – zines, prints, t-shirts or found materials – is never limited to one specific medium, nor is it syntactic or hierarchic. He cross-pollinates, combines and is constantly working on several projects and pieces at once.

The heavily layered paintings are accompanied by fragmented sentences, from pre-existing texts or hand-written in zine-aesthetic fonts, forming new subversive statements like “pose,” “you are not it,” “I see God in Everything” or “I’ve suffered my whole life for you, an’ waddaya do? Ya run away.” Operating like a bootlegger of visual culture, Wright lifts the hijacked images and words out of their original context and, as a strategic détournement, into his own world. A strange, fabulating, sometimes horrifying, yet always surprising, poetic visual vocabulary. 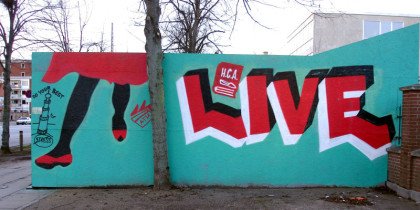