Anbefalet under Det skal du se! uge 17
Many artists formed and worked with occupations, protests, and direct action. While others developed a language of revolt and social critique in their practices. These activities have had last effects in developing social movements in other areas of society and mark an important turning point in Japan.

Excerpt from the exhibition folder:
It is clear that the Fukushima nuclear catastrophe is one of the most critical ongoing crises of the twenty-first century. Unlike conflict and natural disaster whose temporality is often defined with an event followed by processes of reunion and reconstruction, the time of nuclear catastrophe suspends these processes. 100,000 former residents displaced in a chasm of dead time pending the countdown of the half life of radioactive materials in order to resume a future and the specter of concentrations of radioactive particles entering daily life marks a new era that demands new ways of living and working.

This ongoing crisis has lead to a profound cultural shift in Japan. The previous societal compromise of governance in exchange for safety and stability was ruptured. In its wake grew the first social movements since the 1960s and the start of an awakening of broader political engagement. Fomented by and extending to culture, many artists, musicians, and writers organized the initial protests and many practices radically changed in response to this new era.

This exhibition unfolds in three propositions drawn from the practices of a younger generation of artists in Japan in immediate aftermath and which have been ongoing for the past 6 years.

Kilde:  X and Beyond 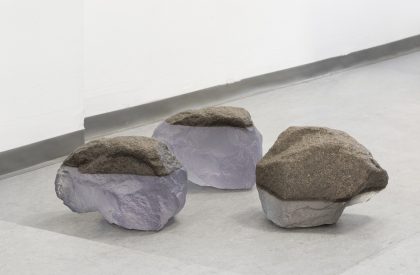 'If only radiation had color. The Era of Fukushima (Proposition 2: Collective Dissent)'