Anbefalet under Det skal du se! uge 47
Drag Kings, Phantoms, Mirrors, Hands (one hundred years of dis/appearances) is a constellation that resonates some of the historical entanglements and queer potentials that flicker in 1917-2017 and between. What follows is a bumpy line of thought towards what can be thought of as a sketch for conversations, not a concept, but hopefully something that gives you a feeling of the field of relations that we can enter together.

It begins on November 24 and 25 at SixtyEight Art Institute in Copenhagen, and is nurtured by the recent works of artists and writers Bini Adamczak, Kader Attia, Kerstin Honeit and Michala Paludan. Drag Kings, Phantoms, Mirrors, Hands (one hundred years of dis/appearances) is a sketch for conversations with the spectres of the (queer, communist, colonial, feminist, imperial) histories these works carry; for tellings and re-imaginings that emerge from unforeseen relations drawn between documents of feminist history in Arbejdermuseet (the workers’ museum) in Copenhagen and the disappeared Palast der Republik in Berlin, between the Prussian castle being re-built in its very place and the phenomenon of phantom limbs in the human psyche, between the mirrors used to repair the imagination while keeping injuries and absences present, and the glitter of camp cowboys dancing to the demolition of imperial castles, between the Drag Kings of the Russian revolution and the emergence of Jamaican Dub music, between the decentralization of speech in feminist organizing and the embodiment of ghosts in the architectures of our times. 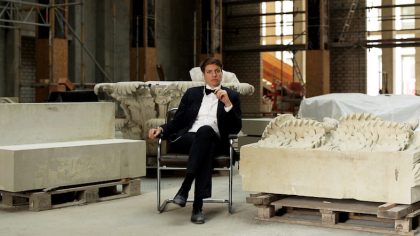