Tableau is proud to present L’illusion des Sosies, a solo exhibition by Davide Ronco – a Copenhagen based multidisciplinary artist and designer.

After a bachelor in Industrial Design from the IUAV University in Venice, he developed a more emotional and sculptural approach obtaining a Master in Ceramic Design from the Royal Danish Academy of Fine Arts. The exhibition title refers to the Capgras delusion, a psychiatric disorder in which a person, commonly diagnosed with schizophrenia, holds a delusion that another close person, pet or object has been replaced by an identical impostor.

Joseph Capgras and Reboul-Lachaux first called the syndrome “l’illusion des sosies”, which can be literally translated as “the illusion of look-alikes.” Styrofoam packaging are an example of our consumerist society where they are used only once for the transportation and safety of the objects, shipped and sold all over the world. They perfectly replicate the shapes and forms of the objects they encase, becoming industrial imprints of our ways of living.

Concrete, the most commonly used material in the world after water, is the ultimate manifestation of human impact on our planet. However, in Davide Ronco’s work, it is seen cracked, fragile and embraced by plants; in other words, taken over by nature. Starting by gathering discarded packaging, Davide Ronco rearranges them into molds to then cast them in concrete new forms which hold memories of their past life. As in the delusion, the external casing of the artworks, the packaging first and the mold after, is what creates the form and is the same both in the original items and in their sculptural contrapositions. The two objects are indeed not the same anymore, but similar and linked by forms, textures and impressions. The illusion of a ghost from the past in a new form.

Tableau and Davide Ronco have in common the desire to work with both raw and industrial man-made materials. The artist’s work and Tableau’s universe perfectly converge. During the exhibition, flowers in all shades of green, displayed around Davide Ronco’s works, will set up an urban jungle and give the feeling of walking across ruins. As always, the flowers will also be for sale so you will therefore be able to take a small part of the exhibition home. 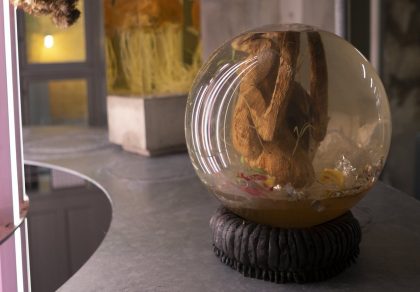