The city is the point of departure for Carlos Garacoia’s art. Since the early 1990s, he has explored how the city and its architecture both reflect and affect society. In his simultaneously poetic and political work, reality and fiction meet, with people and citizens at its centre.

Currently, Garaicoa resides in Madrid, but he regularly returns to his home city of Havana in Cuba, where he still works and has a studio. Havana’s abandoned and unfinished building projects and the lost dreams they represent are a starting point for his reflections on the failure of all utopias. In Havana, dilapidated historical buildings of the colonial period and the early 1900s coexist with the Cuban revolution’s many stalled projects. Following the fall of the Berlin Wall in 1989, Cuba was isolated and the country suffered a serious economic crisis that rendered the majority of building projects impossible. For Garaicoa, the urban ruins became a symbol of the setbacks of the regime and the death of the revolutionary utopia. Beyond the Cuban context, his art highlights the dark side of all utopias and is a critique of modernism and the ideological social planning projects of the 20th century.

Garaicoa started by creating anonymous installations in the city, but he quickly moved on to using photography and drawing and eventually also sculpture, video and architecture in his exploration of how the city always exists in a political and economic landscape. Sketching and building models are key to Garaicoa’s artistic process, just as they are to the architects and urban planners who create the public spaces. He builds models and sketches and draws with both pen and thread. Garaicoa’s work is usually based on a recognisable reality; however, the city as a symbolic space is a recurring element in his work. In his study of architecture and urban planning as a language of power, he uses the biblical tower of Babel in several of his works, in both models and drawings, as a metaphor for social criticism. In many early projects, the drawing becomes an imaginative reconstruction of what once existed but fell into decay. In other instances, the drawing is a more or less fictional, a completion of that which remained unfinished. Sometimes the drawing evokes ruins that have been demolished, that which is lost forever. In work that alludes to yet distorts the use of architectural blueprints, the viewer is urged to create the image of constructions that are yet to exist. This appeal is central to Garacoia’s art – a call to not be a passive observer, but to adopt a questioning, critical and creative position in relation to the forces that create cities today and in the future.

The exhibition shows works from the 1990s until today. 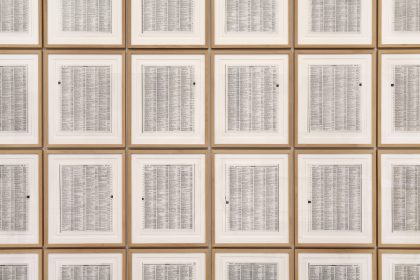 'Carlos Garaicoa: …a borderless reality like gardens of the eternal…'